Little tutorial on how to use an external effects processor, reamp using a real amp and use SMPTE code to midi sync, all by using the “hidden output” of the R8 (and R24).

Outputs
The outputs of the Zoom R series multitrack recorders are very limited.
Basically you got your stereo out and your phones out and that’s it.
Wouldn’t it be nice to have individual outputs for each track or a sub-out to carry a mix that is separate from the master out etc.
No unfortunately we’ve got just the above mentioned 2 outputs and they seem to carry exactly the same signal.
However, just looking at the input section of the panel layout you may notice there’s a “metronome” switch that lets you choose between “output + phones” and “phones only”.
The metronome can be “routed” to the phones output only and it looks like you can have a different output signal on the stereo out and the phones out, it may be just the metronome but still.
If you look a little further to the input section of the panel layout you’ll also find that if you set the switch to phones only the balance knob can be used to set the balance between master and click.
This means that when the balance knob is turned all the way to the right (click) the only thing which is heard through the phones out is the metronome.

The result is that we got 2 completely different signals, on the stereo output we’ve got the master signal and on the phones output we’ve got the metronome.
This option may come in handy when you want to have your drummer hear the click at a live gig and have the master (without click) send to a PA system but other than that it doesn’t appear to be very useful but stay tuned; there are some side effects with some interesting possibilities.

The click track
In the old days a click track was really a track that took one of the tracks on a multi-track tape with the recorded sound of a metronome.
Zoom must have had this in mind when they implemented the options for the metronome sound.
Apart from choosing sounds like “Bell”, “Stick” etc. there is also an option to choose a track as the metronome sound. 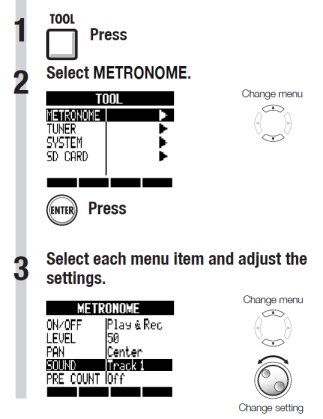 1. Press tool
2. Select metronome
3. Adjust the sound setting to a track
More info R8 manual page 20 or R24 manual page 36.
You may think the first beat/second is used as metronome sound but that’s not the case if you choose a track as metronome sound, it is just played like any other track.
This gives you the ability to import a click track from a DAW being just a wav file with a recorded metronome sound.
Of course if you choose “phones only” for the metronome, the track set as metronome sound source is no longer routed to the master output.
This may be confusing because although a track is set to playback (green led) and the fader is all the way up, you still won’t hear it over the stereo (master) output.

For those of you using a R16, the option of choosing a track as metronome sound is R8 and R24 only, it is not possible with the R16.

Unconventional
What we learned so far is that the unit can output a click track imported from a computer instead of the metronome sound to the phones output only and this imported click track is just an ordinary audio wav file assigned to a track.
And here starts a little magic when we use this feature in an unconventional way; if it’s just an ordinary wave file assigned to a track than any track can be routed this way.
If we have vocals recorded on track 1 we could route the vocals to the phones out only completely separated from the rest.
Having an isolated output suddenly opens up all sorts of possibilities!
How about sending this to an external effects processor like a reverb or reamping a dry recorded guitar track using any guitar multi-effect modeler you like.
And last but not least you could record a SMPTE signal to a track and route it to a SMPTE to MTC converter and have all your MIDI gear in sync.
Let your imagination run free and you will think of more.
The nice thing about the R8 is that you can mix the 2 inputs to the final mix which means that when you use an external processor you can use its output real time during the mix, the R24 won’t allow this and you might need to record it first.
Next I will give you some examples how to set it up. 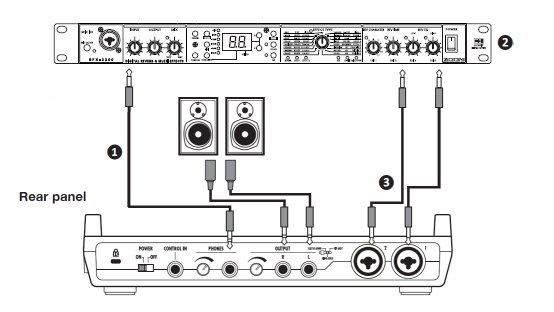 Reamping
Reamping is a technique in which for example a guitarist records a dry, un-processed, un-effected track and at a later time, the recording is fed to a dedicated guitar amplifier and/or effects box(es) to “re-record” the guitarist’s unprocessed performance.
It has the advantage that settings and tones can be adjusted later while the guitarist does not have to play his part over and over again and you can experiment to get the best tone suiting the final mix.
Now you may not realize this but the R8 can do this all along on its own.
It’s because the insert effect guitar algorithms (equivalent to the G2Nu) can also be applied to an already recorded track (see “Using the insert effects on tracks” on page 45).

Recording the result on a different track is basically reamping using the internal effects processor.
However sending the isolated guitar track to the phones out will let you reamp outside the box.
It gives you the ability to use anything you like for reamping even a real genuine tube amp.
Of course you can do this during your final mix but you could also really re-record it, it’s all up to you.
TIP: use the internal insert effects only for monitoring (page 89) while you record your unprocessed guitar signal to still have some sort of guitar tone as recording a dry guitar tone can prove to be very boring. 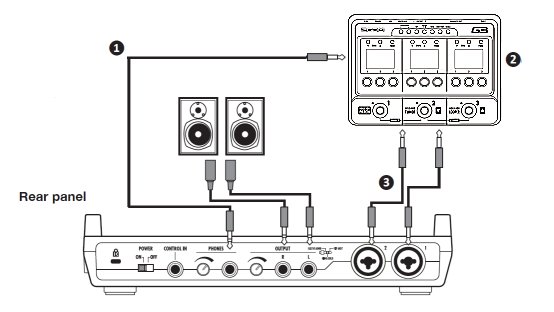 This is a great way to dial in tones because you can completely concentrate on your tone without having to hold a guitar.
And another great thing is that although you’re routing this as being a metronome track the track sequencer still works for this track.
This means you could just record one riff and have it loop all day while you do your tweaking. 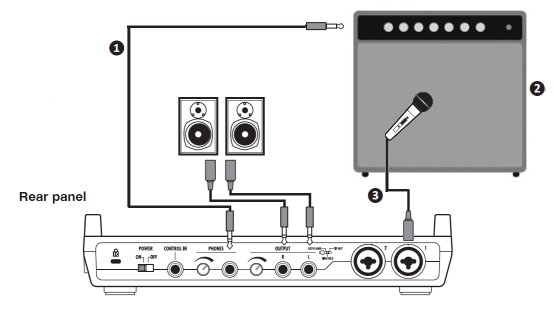 1. Phones out isolated guitar track to input of guitar amplifier
2. Guitar amplifier
3. Microphone recording the sound coming from the amps speaker
You may want to record it to a different track

SMPTE MIDI sync
In this age and time of DAW’s, syncing midi devices directly to a multitrack recorder isn’t that popular anymore and because the R8 can operate as an audio interface it’s more or less superfluous.
Still some of us prefer not to use a computer.
With the introduction of the R-series multitrack recorders Zoom decided to no longer support midi sync as opposed to the HD series.
If you still want midisync without using a computer you’re left with one option and that’s using SMPTE code.
In the old days an audio sync tone version of SMPTE called linear or longitudinal time code (LTC) was recorded on a track of a multitrack tape recorder.
Played back it was converted back again to MTC (Midi Time Code) and used to sync all sorts of midi gear.
In fact the recorded SMPTE signal is basically a more complex kind of click track as it is also a way to keep “track” of time using an audio signal.
Now it may be a bit old-fashion and it might be hard to find a SMPTE to MTC converter these days but it’s still a method that works remarkably well and as long as Zoom doesn’t reinvent midisync it’s an alternative.
Good SMPTE to MTC converters are the Phil Rees TS1, JLCooper PPS-2 or MOTU MIDI Express XT and you may find these reasonable cheap on eBay.
Of course we want this audible string of zero’s and one’s completely separated from the rest so our isolated track output to phones only method is just the way to go and luckily we can use it otherwise we couldn’t use SMPTE/LTC at all. 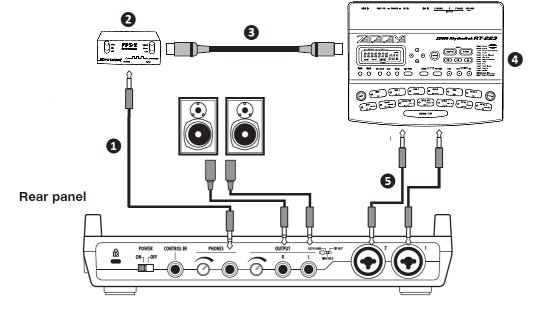 Going stereo
And there’s more, apart from selecting a single track as metronome you can also select a pair of tracks like Track 1/2, Track 3/4, Track 5/6 and Track 7/8.
This gives even more options like feeding a stereo signal to an external effects processor.
Remember the phones out is of course a stereo output (jack) and you need a stereo to mono splitter to begin with. 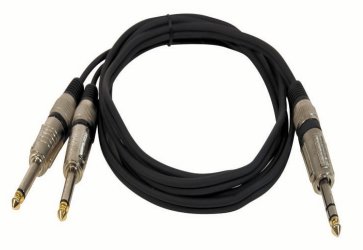 These track pairs can be a linked stereo track but it is not necessary, it can also be 2 mono tracks.
These 2 mono tracks can then be panned all the way left and right (with the normal pan control) and that means you will even have 2 separate outputs…
Imagine a SMTPE track to sync your drumcomputer AND a guitar track going to your guitar effect processor running at the same time.

It’s clear the Zoom R8 instantly becomes much more versatile when you use this “hidden output” and maybe one day Zoom will include 2 extra outputs in their multitrack machines but for the time being this workaround will do fine.
Have fun.

Thanks to mhelin for the idea of using the metronome sound in an unconventional way and running it in stereo.