BIOGRAPHY: After studying classic guitar for 5 years Henky Bakker decides to transform a Beethoven piece into a guitar piece and name it ‘Opus 61’. But the group what Henky formed to play it live doesn’t get the chance to do that, mainly because of its pretentious character.
Then, at the end of ’82, Henky and his bass player, Erik Meijer, decides to start a Heavy Metal band where they also could put in their classical influences. A few years before Yngwie Malmsteen claimed his fame. What follows is another story of many line up changes. At the 1st gig Arnold Presburg was the drummer with Cor Meyer on vocals. In August ’83 singer Katrien van den Berg took over Cor’s mic. It was just before the support gig for Loudness in de Melkweg in Amsterdam. Soon after that Arnold and Katrien got replaced by Maurice Daniël Hirschaut on vocals and Cock Krouwels on drums. In this line up the band records at the end of ’83/early ‘84 the brilliant 7’’ single ‘I’ve been Trying/Excalibur’. Especially Henky shows what a brilliant guitarist with his fast and furious solo’s. This single is truly one of the highlights of the Holland Heavy Metal collection! In January ’84 Maurice has to leave the band again due to personal problems. His replacement became Peter Ort who was formerly active on the Frankie Woodhouse LP.
Some time later also Cock leaves the band and probably through Peter the band drummer Frankie Woodhouse takes his drum seat. But not long after that Frankie got replaced by Henkie Mulder, who was just 18 at the time. The band gigs a lot and at one of the gigs, in Helmond, the band records it and release it later as a live demo. At this time serious plans are made for a full length album. Pre-recordings are made. But the band is having trouble to release the album. Then Peter gets tired of waiting for the release and quits and got replaced by George Peters.
In the new line up they record the demo ‘Mirage’/’The Spy’. Then at the mid of ’86 the band change their name into Jewel because of the many Swords around. So the story continues on the Jewel bandpage! 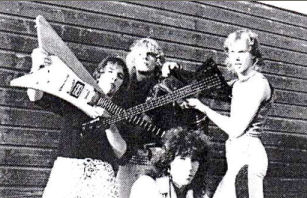