How the Ibanez Moderne became my number 1 guitar

As a little kid I used to look through the window of this huge guitarstore in my hometown and you could see hundreds of guitar hanging on the wall.
One day I told my mother when I was gazing through the window again when I’m older and can afford it I want to have that guitar while I was pointing at a guitar which at that point I thought was a flying V.
Little did I know, the guitar was hanging behind another guitar and you could only see one side.
Weeks went by and then my birthday came, my mother hadn’t forgot what I said and she bought this guitar for me.
You should have seen my face when I opened up the case…
It wasn’t a flying V at all, although one side was flying V, the other side was “round”.
I was lost, happy because I got the guitar of my dreams but sad because it turned out completely different as I expected.
I couldn’t dissapoint my dear old mother as she bought it with her hard earned money, so bringing it back was out of the question.
So I kept it and it has been with me all along.
I had many guitars over the years but I always came back to this guitar because there simply was no other guitar which suited me better, played better or sounded better.
Eventually I got used to the shape and fell in love with it.
The guitar turned out to be an Ibanez Moderne (futura) copy of the 1957 Gibson Moderne which remains the Holy Grail of guitar collecting.
Although being a copy of a guitar which might have never even existed the Ibanez is a world class guitar in his own right.
It was made during a time Ibanez made their so called ‘lawsuit’ guitars which is used to describe any Japanese copy guitar made in the shape of an American manufacturer’s model.

The famous ‘lawsuit’ guitars
So here’s the lowdown. In Japan during the late 70’s and early 80’s there were several guitar makers that decided to copy/replicate the great old Gibsons and Fenders from the 50’s. They actually had vintage guitars, pretty much copied them very very closely and sold those guitars to high end guitar buyers in Japan. There were several makers and ALL of them made really good copies. Ibanez,Tokai,Greco,Burny,Fernandes were the biggest and most well known. Not only are their guitars very accurate in feel, quality wood and construction methods were used. Good quality parts, tuners and pickups were used. If you put a Gibson logo or Fender logo on them you could fool many people except the experts in guitar identification.? The goal was to reproduce the best American made guitars from the golden era, the late 50’s and make them affordable to the high end Japanese markets. They are some of the best guitars ever built from playability to attention to detail to tone, at a time when the Amercian guitar makers were making a poor quality product.
The Ibanez Moderne is no exception there IS a tonal difference that many people like better, more sustain and resonance.
A famous guitar player who used such a lawsuit guitar was Eddie Van Halen.
He used an Ibanez Destroyer on the Van Halen 1 album and we all know the guitar sound of the first Van Halen album is one of the best there is.

Through the years I collected more of these and customized them and they all sound amazing. 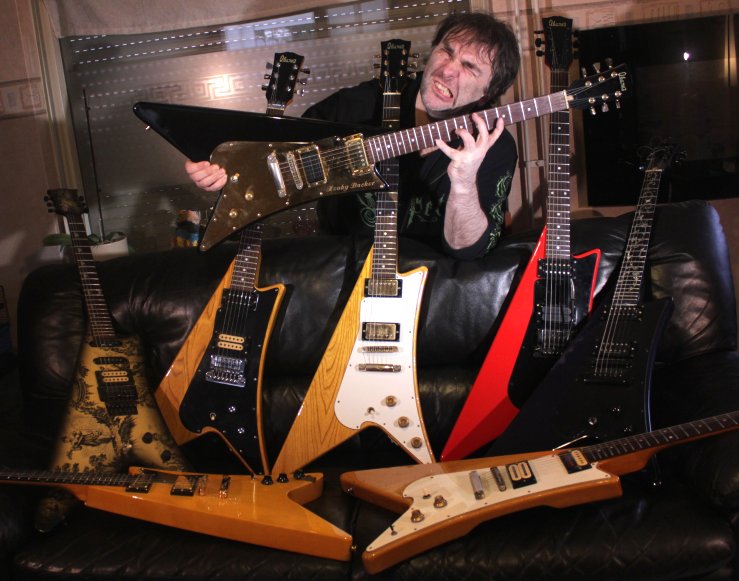